Matsuyama Castle - one of the best! 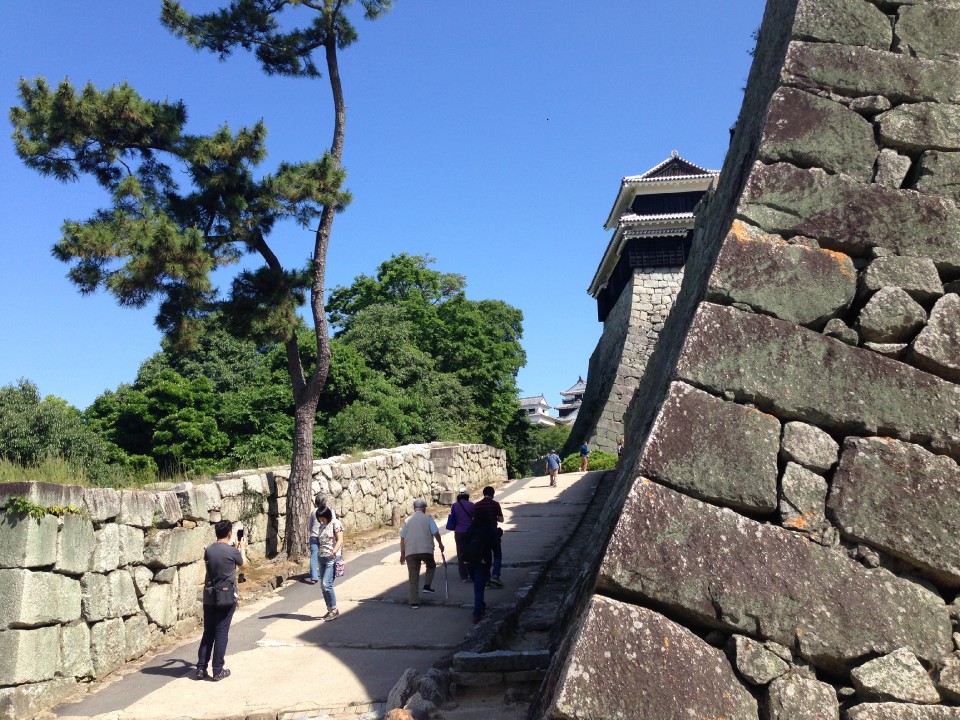 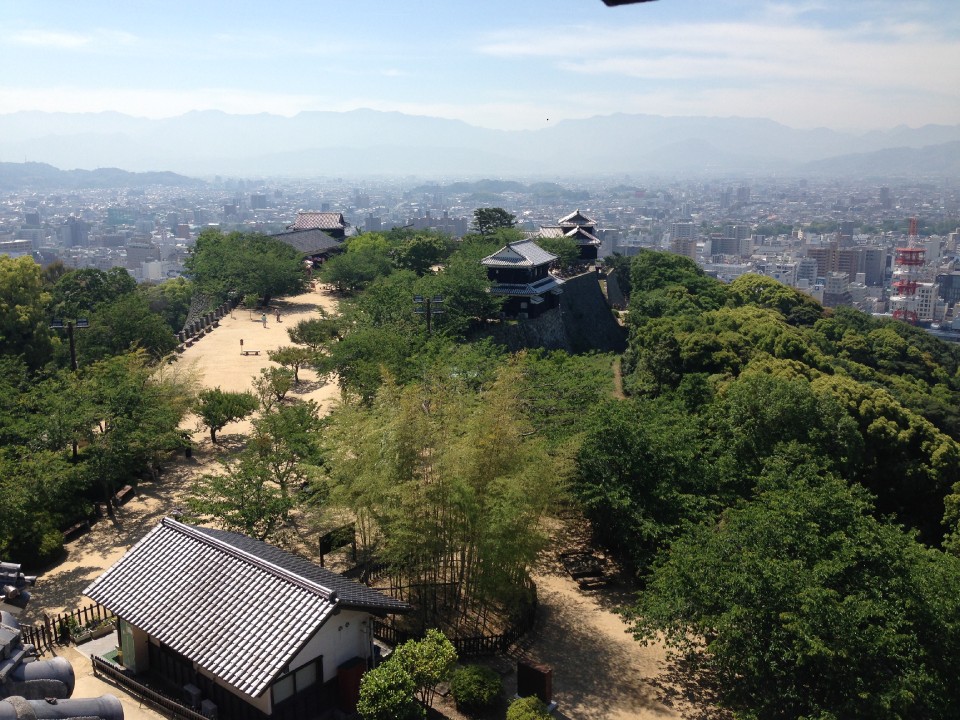 Terrific views from the castle tower

Whenever my friends from overseas ask me what would be a classic thing to do in Japan, I always reply that visiting a medieval castle and staying in an onsen town (hot spring bath) are a "must". There is no doubt that a visit to Matsuyama City is the perfect way to combine both of these in one trip as it has one of the best preserved original castles and the oldest onsen in Japan.

Matsuyama City is the capital of Ehime Prefecture and is located in the northwest area of the island of Shikoku, fronting the Seto Inland Sea and surrounded by mountains cloaked in deep green forests. With a population of just over half a million it is easy to get around and has all the amenities of a large city, including an international airport, hotels and department stores. It is a classic castle town spread around the base of a 130 meter hill that is crowned by a beautiful castle that is visible from anywhere in town. The town in easy to get around using the tram system and buses. Matsuyama is the birthplace of Japan's most famous haiku poet, Shiki Masaoka and calls itself the "world capital of haiku culture" and you will find many haiku 'boxes' around the city where you can post your own haiku!

If you don't feel like walking up through the tree shaded trails to get to the castle there is a choice of a ropeway or chairlift to get to the top quickly and in comfort. Once on top, imagine you are an attacker trying to get into the castle and you will soon understand how cleverly designed the castle is; full of false trails, dead ends and secret entrances. The castle took 24 years to build and was completed in 1627 well into the peaceful Edo era which meant that the castle was actually never attacked. Like all Japanese medieval castles it has a series of beautifully shaped stone walls on which wooden gates and towers stand. The main tower affords a fabulous 360 degree view of the surrounding area, including the Seto Inland Sea. Also in the main tower there are displays of samurai weapons and even samurai armour that you can try on and have your photo taken with. The castle grounds are covered in cherry trees which make for a beautiful pink hue in the Spring, and the castle is lit up at night,which makes a pretty scene from any part of the town.

The best way to get to the castle is to take the tram to Ropeway Street, which is lined with trendy restaurants and shops and walk 5 minutes to the ropeway and chairlift building. Entry into the castle and a return cable car ticket cost Yen 1,020. 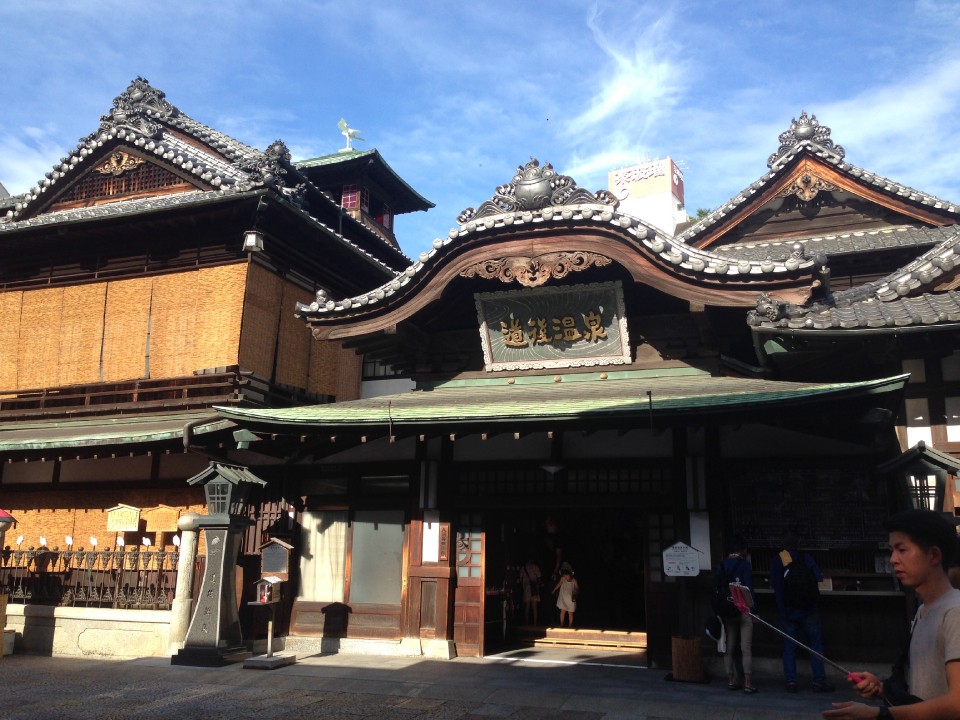 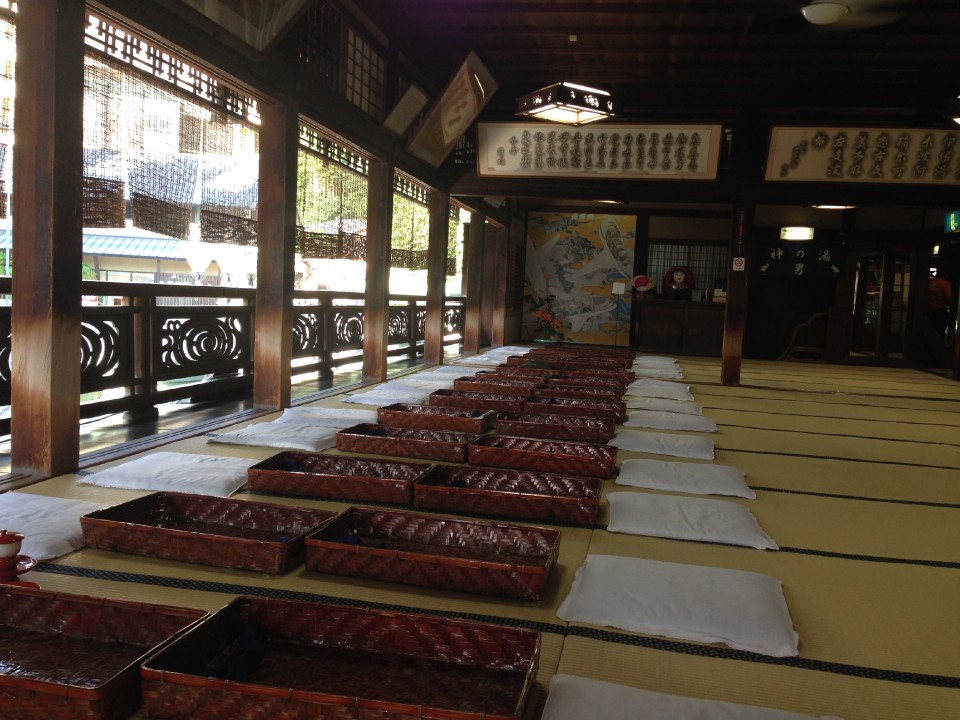 Relax and drink green tea in the lounge after your bath

Dogo Onsen is located on the outskirts of Matsuyama and has a 3,000 year history making it the oldest onsen town, having been recorded in the Kojiki, an ancient chronicle of Japanese history. Dogo Onsen has a large number of different ryokan and hotels where you can enjoy the onsen, but what sets it apart from other onsen towns in Japan is the "Honkan". The "Honkan" is a beautiful wooden bath house built in 1894 and run by the city government which is open to the public. It has two large baths to choose from where you can join the locals in a pleasant soak. After the bath, for an extra fee you can relax in your yukata on the tatami in one of two lounges with Japanese tea and crackers provided, or rent a private room. The Honkan is very much as it was 100 years ago when the famous Japanese novelist Natsume Soseki used to come. Indeed, the Honkan boasts an Imperial bath built in 1899 for the exclusive use of the Emperor which is now open for viewing to the public - quite elaborate and well worth visiting for just Yen 260.

There are any number of hotels and ryokan with onsens to choose from in Dogo Onsen area but one I would recommend as the most special ryokan is 'Funaya', where the Emperor has stayed. The facilities are all modern but the garden is traditional and the service and food are impeccable and well worth it for a classical Japanese experience.

There are plenty of things to see and do around Dogo Onsen such as an outdoor free footbath, a 'Botchan' clock tower, a cute train and tram station, galleries and shopping arcades. A must visit place is the nearby Ishite Temple, established in 728 and number 51 on the famous 88 temple Shikoku pilgrimage trail and so a good place to see pilgrims. The temple has a unique inner temple that is accessed via a 200 meter underground passage lined with Buddhist statues - cool on a hot summer's day!

A fun way to get to Dogo Onsen is to take the "Botchan" replica steam train which runs the 10 kilometres from Matsuyama Shieki to Dogo Onsen in 20 minutes or just take a city tram. The Honkan is open from 6am to 11pm. Entry into the main bath costs Yen 410. Entry to the "Tama no Yu" bath plus 2nd floor lounge, including yukata, tea and crackers cost Yen 1,250, and is well worth doing.