Ghosts and spirits hold a place in the folklore of many cultures around the world. In the western world, Halloween, observed on October 31st, is a time for scary, spooky tales, while Latin America will celebrate the deceased on the following day, November 1st, in a holiday called “Dia de Muertos”, the “Day of the Dead”.
For Japan, however, the haunting season is smack in the middle of August, a time when most people are thinking of summer vacation, the annual high school baseball tournament and an ice cold beverage. August is also when the famous Obon festival is held, an event which underpins much of Japan's tradition in revering and honoring one’s ancestors.
Most people from outside of Japan may have got their first taste of Japanese supernatural stories from the overseas release of the smash hit horror movie, "The Ring", where the main ghost character pays homage to Oiwa, the original Japanese apparition who first appeared in a Kabuki play almost 200 years ago.
But, how did it come to be that August is the time to raise the dead in Japan, and what goes on in the world of the supernatural?

A ghost and goblin for just about every occasion 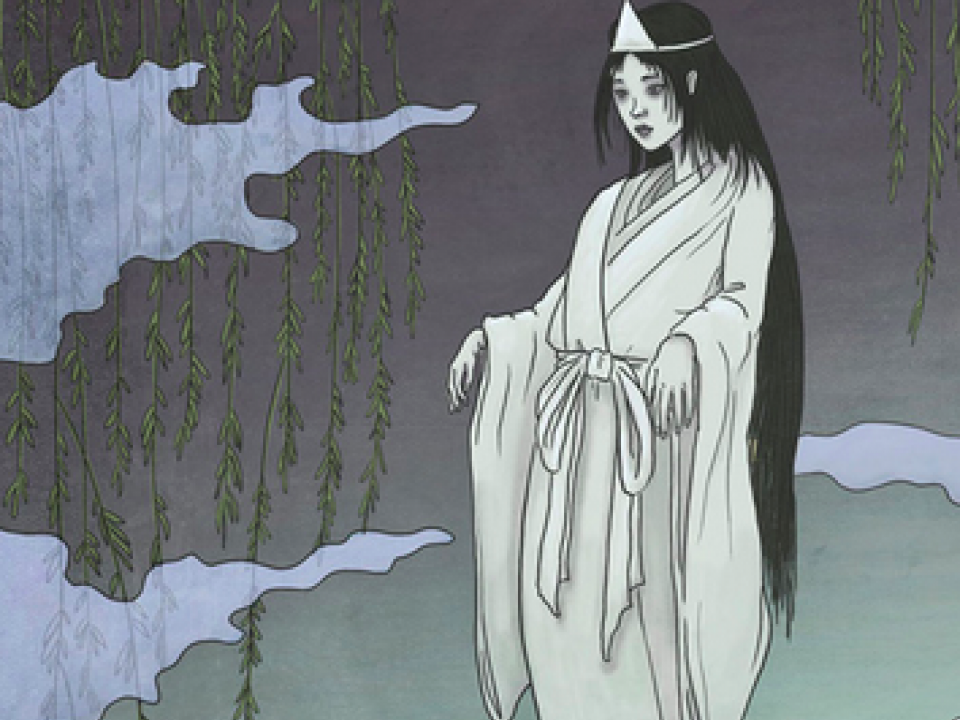 A typical representation of a yurei In the physical world, Japan is known for its crowded commuter trains. Similarly, the country has a pretty packed supernatural plane. Trying to get through the veritable witches’ brew of etherial inhabitants that make up Japan's ghost world would take up a lot of space and go way beyond this article, so let's take a broad look at the main characters:

Yurei （幽霊）
Similar to ghosts in western folklore, Yurei are the spirits of the deceased. According to traditional Japanese custom, all humans have a soul called the reikon （霊魂）. Upon death, the reikon leaves the body and enters a form of purgatory until a proper burial and ceremony can be held so it can go off and join its ancestors. The reikon then becomes the protector of the family for future generations and this is the spirit Japanese people celebrate during the Obon festival in August.
However, things can go wrong. If the person dies in a sudden or violent manner such as a murder or suicide, or if the proper rites have not been performed, or if they are influenced by powerful emotions such as a desire for revenge, love, jealousy, hatred or sorrow, the reikon can transform into a yurei, which can then come back to the physical world. The yurei will exist on Earth until it can be laid to rest, either by performing the missing rituals, or resolving the emotional conflict that still ties it to the physical plane. If the rituals are not completed or the conflict left unresolved, the yūrei will remain and continue haunting.

Most often portrayed as young women, yurei are noted for white clothing, which comes from Buddhist funeral rituals, long black hair, and no legs or feet, as the body tapers off below the waist

There are several categories of yurei. Among the main ones are:
Goryo: The vengeful ghosts of the aristocracy
Onryo: Another vengeful ghost category who come back from purgatory to right a wrong done to them during their lifetime.
Seductresses: Ghosts of a woman who starts a post-planal love affair with a living human
Ubume: A mother ghost of a woman who died in childbirth. She often takes care of her children from the great beyond and brings them sweets.

Yurei do not run around randomly, but stay near a location, either where their body lies, or near the site of an event such as their murder. They may stalk a specific person, such as their murderer or lover, and usually are said to appear between 2am to 3am, when it is believed that the curtain between the physical world and spiritual world is at its weakest.

Yokai （妖怪）
Yokai are not spirits, but earthly creatures, more akin to goblins in the west. There are literally hundreds of Yokai of almost every conceivable shape and origin, ranging from the Nekomata （猫又）, a type of monster which takes the form of a cat and is often portrayed as playing a shamisen, to Yama-Biko, a small creature similar to Echo of Grecian mythology, to Hitodama, a fireball ghost which appears when someone dies, to Azukiarai, a yokai who is always found washing azuki beans. They range from the benign to the mischievous to the downright malevolent and may occasionally, and perhaps a bit oddly, bring good fortune to those who encounter them.
As you could probably guess from the quick introduction above, Yokai can take many different forms such as animal or human, or even as goblins or inanimate objects.
The first Yokai were mentioned in a Chinese manuscript dating from the 1st century AD, but the publication of Bakemono Chakuto Cho by Masatoshi Kitao in 1788 (Tenmei 8) really brought Yokai into public consciousness.
Some yokai also have the ability to shape shift. Such yokai are known as Obake （お化け）.
Yokai, unlike Yurei, are not bound to a certain person or location. They roam the country freely and you might encounter a Kappa (a mischievous, but harmless, turtle-shaped yokai) near a small stream or pond some summer's evening.

So, why is August ghost season in Japan? What’s up with that? 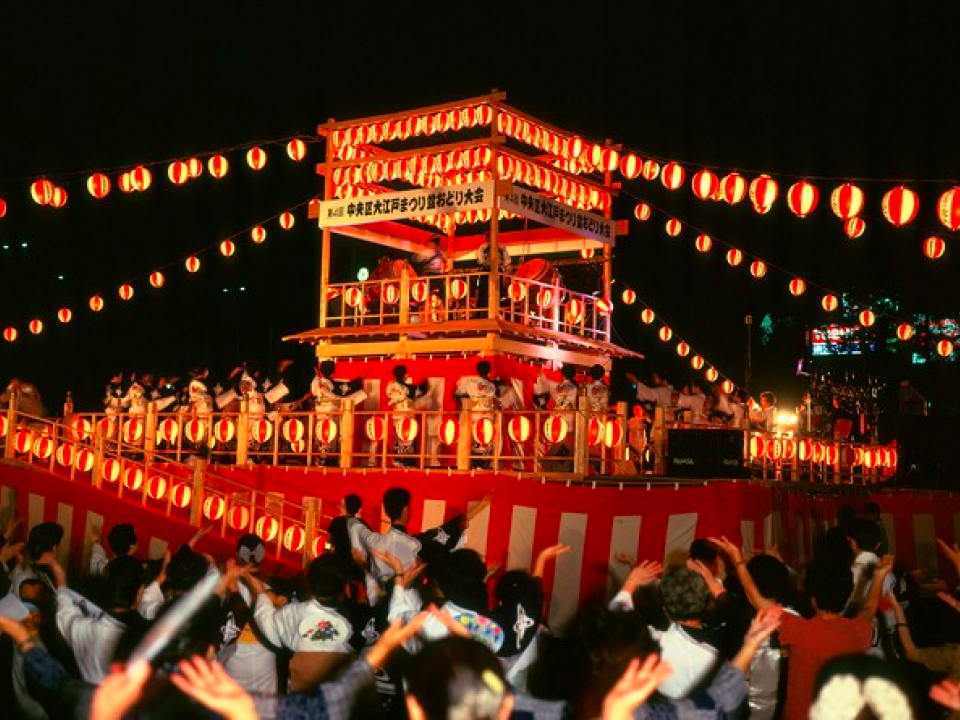 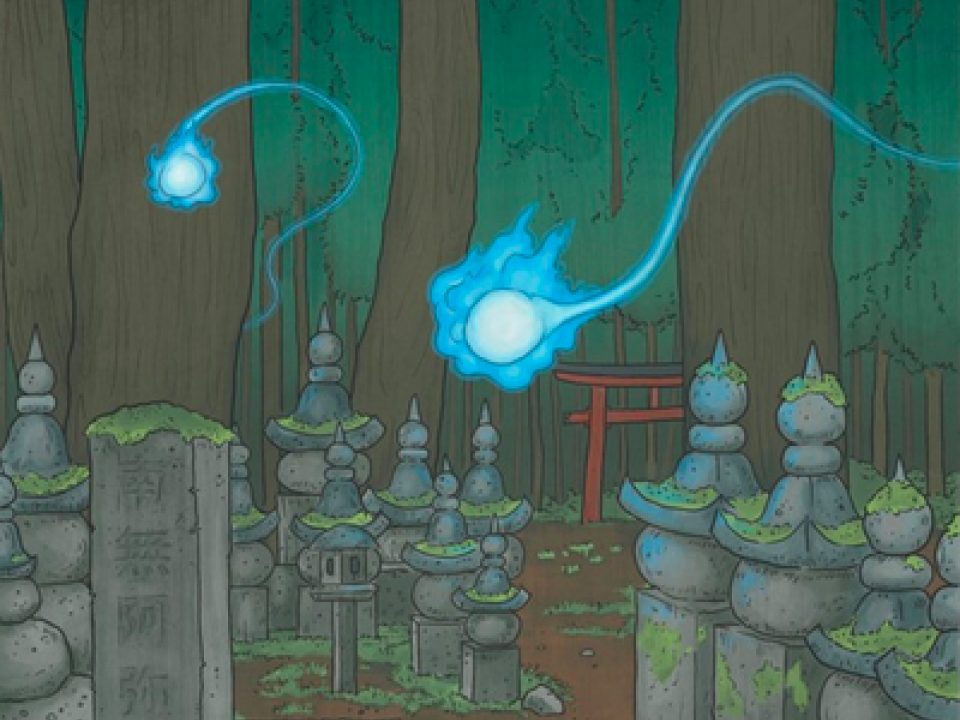 There is an extended holiday in Japan called Obon （お盆）, which started out in the 1500s as a Japanese Buddhist custom to honor the spirits of one's ancestors. It is usually celebrated in mid-August, and you could easily think that Obon was the start of the association between summer and Yurei and other supernatural beings.
But, that is not how it happened. Forging the tie between summer and specters was actually the work of a kabuki play first performed almost 200 years ago.
In the early 1800s, a Japanese kabuki playwright named Tsuruya Namboku IV (1755-1829) noticed that crowds in Kabuki halls across the nation dropped dramatically during the peak of summer in the month of August. Before air conditioning, public theaters were stuffy and miserable places in summer, so it is little wonder that attendance would drop off until cooler months allowed for more audience comfort.
In a bid to bring a summer crowd into Edo’s old Nakamuraza Theater, Namboku scripted a horror show called Yotsuya Kaidan (四谷怪談, Ghost Stories of Yotsuya) in 1825 to be performed at night during August. A tale of betrayal, murder and revenge from beyond the grave, the play proved to be a smash hit and brought ghouls to the masses. Yotsuya Kaidan featured the tortured tale of Oiwa, a young woman who died at the hands of tormentors and came back a ghost wandering the earth to seek revenge - a yurei. Oiwa's yurei form is the basis on which Japanese ghosts have been modeled ever since (and the character who served as the inspiration for "The Ring"). Before Yotsuya Kaidan, scary specters were associated almost exclusively with the wealthy, but the play allowed common folks to get in touch with their inner apparitions. The success of Yotsuya Kaidan after its debut forced producers to schedule out-of-season performances, but its main draw, even to this day, has been summer. Yotsuya Kaidan is still performed and has since been made into a movie no less than 15 times through the years.
The Obon festival, meanwhile, had been celebrated for at least 300 years prior to the debut of Yotsuya Kaidan at Nakamuraza, but it had no firm date of observance, and many locales celebrated Obon at different times. Gradually, through the rest of the early 1800s, most Obon celebrations began to gravitate toward the same time as the performances of the now nationally famous Yotsuya Kaidan, and by the mid-1800s, with the integration of Yokai, Obake and other scary characters, mid-August became the de facto witching month in Japanese culture. While local Obon festivals can still be celebrated either in July, August, or on a moving lunar calendar, the common observance of the holiday in mid-August can be directly credited with an uncommonly successful Kabuki horror story.